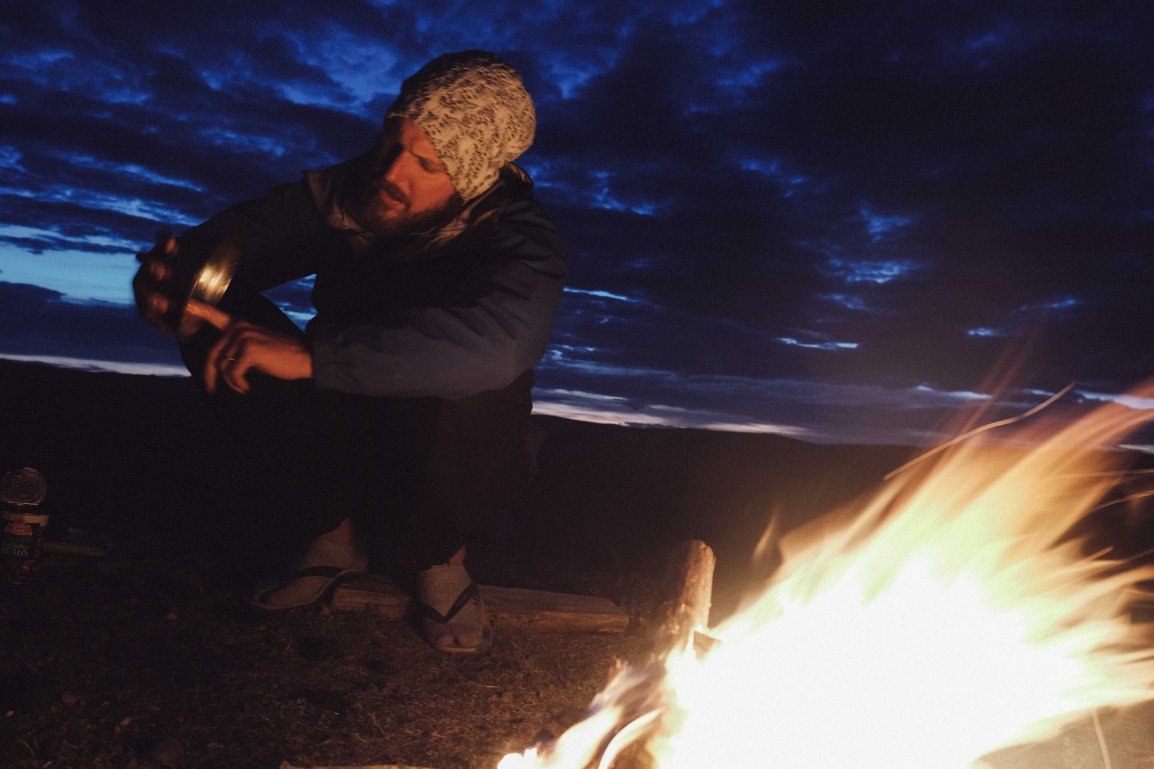 We set up camp a few kilometers outside of Dasichilen, where we had resupplied earlier that day. The smell of onions, garlic and cabbage wafted from a sizzling pot that sat expectedly, under Olivers care. Janis Joplin’s “Me and Bobby McGee” mixed harmoniously with the crackling fire and the sound of an air mattress being inflated, as if they were born from the same star, cut from the same cloth, birds of the same feather or what have you. Everything felt in its right place, and I, the observer and participant sat still and absorbed it all. I sat still, and the bread i’d kneaded a few minutes prior rose, slowly, like the yellow/white moon above. The sky began to change color, as did the song. Geese began to make their way home and the horses have all cleared out of the pastures. As if right on queue, we turned our faces toward the sound of a motor in the near distance. “They’ve found us.” Claudia stated, slightly disheartened.

Its tempting to feel alone in the Mongolian countryside— to set up camp “stealthily” looking down the meadows seeing no one in sight for miles. Almost always, the nomads know we are there. Almost always, right as dinner is nearly ready, someone arrives. So he did. The Mongolian man rode over on his motorbike, dressed in traditional nomadic horse riding clothes. Essentially, its a really big coat with a sash around the waist and homemade leather boots. With no emotions, he comfortably walks over to us and squats, just watching, as our Mongolian visitors seemed to do. Claudia, Oliver, Jerry and I, being used to these visits by now, assumed our normal roles in the interaction. They all kept to their tasks and I made a fool out of myself, pantomiming, showing pictures, playing ukulele and throwing up nonsensical hand gestures to try to explain whatever it was that I was talking about. In the end, I was pretty much having a conversation with myself. He didn’t even crack a smile. So, giving up, I, too, tended to my task of baking bread. It had fully risen by now and was ready to be put on the dying out campfire. Finally, the stone man moved. He walked over to my bread, gave a nod, got on his bike and road away.

This isn’t “not normal.” In fact, this kind of interaction was a daily occurrence. Mongolia’s nomadic people remain a mystery to me. After two months in the country I’m still unsure. “Are we friends?” “Are you mad?” “Are you okay?” Back home in the States we have a way of expressing ourselves so outwardly and loudly and energetically that anything less than that feels dull, angry or sad. Maybe, the magic in Mongolia lies in its subtleties and nuances. Maybe, it was a positioning of the feet, the amount of blinks of his eyes, or his passiveness that communicated what, back home, would normally manifest as “WOW! This is so cool! Soooooo nice to meet you!” Or maybe not. Maybe, he truly didn’t care. I, however, like to play with the idea that, in a place so remote as Mongolia, the mere act of coming over, and sharing company, in the silence and stoicism of a sacred ritual, is simply enough. It is enough to communicate the “I see you.” Not just physically acknowledging our existence, but “I see you” as in “I listen. I smell. I see. I hear. I understand.” I think of my role in the interaction, how conditioned I am to try to create a sense of jubilance, of animation and energy—that extra layer, if you will. I think of how unnecessary and probably foolish I seemed, trying to kick up dust in the silence, when the silence held everything already, and more.

I'm a 25 year old recent graduate of Penn State and am embarking on a mission to see the world in hopes to unlearn, relearn, connect and just be me for a while. View all posts by nicoleheker

Hello! I’m Nicole. I’ve been solo-traveling the world for the past two-years all while managing the Happy Kids Center along with my two partners, Ellen and Joyce. I believe in power of writing my own myth. I believe in following my bliss. I believe in experience.